I hope everyone is staying safe during this uncertain and terrifying time. If you’re stuck at home, now is the perfect opportunity to appreciate the cathartic potential of horror fiction. To that end, I have two announcements to make:

First off, my story, Piss Slave, which originally appeared in Nihilism Revised’s anthology Strange Behaviours, and was later reprinted in my collection, Nightmares in Ecstasy, has been translated by Diego Cepeda over at Ediciones Vestigio. If you’re interested in reading the translation and supporting this wonderful Columbian press, head over to their Patreon page. As an added incentive, the translation also includes an incredible piece of art by Camilo Andrés. It blew me away.

On top of that, I have a new story in the latest issue of Forbidden Futures. It’s a weirdo/apocalyptic body horror story called “Mother’s Mark”. I’m very happy with this one, and it’s featured alongside a roster of some of the best writers in the field: Kim Vodicka, Craig L. Gidney, Gregory Bossert, Michael Allen Rose, Ed Kurtz, Jeff Strand, Matthew Bartlett, and Edward Lee. If you want to give it a read for free–and you should–head over to the FF website and sign up for the newsletter.

I also want to take this opportunity to thank everyone who’s been picking up the audiobook. And also, if you have money to spare, consider supporting your favourite artists during this period of quarantine. Not only will you be getting some awesome movies/books/video games/music to pass the time, you’ll also be helping to keep these creators afloat!

Happy Friday everyone! I’m thrilled to announce that the audiobook edition of my Wonderland Award-winning collection, Nightmares in Ecstasy, is now available for purchase. It was narrated by the talented Conner Goff, who also provided his voice for books written by Jack Ketchum and Adam Nevill. If you’re looking for a heavy dose of WTF for your morning commute, you’ve come to the right place!

You can buy a copy by following this link!

It’s the morning after the Wonderland Awards and I still can’t believe what happened. NIGHTMARES IN ECSTASY won the award for Best Collection. Thank you so much to all those who read the book and voted. I love you all! And congrats to the incomparable Gabino Iglesias who took home the award for Best Novel for COYOTE SONGS. Here’s my acceptance speech for those who didn’t attend the awards:

First, I would like to thank Rose and everyone else who helped organize this year’s Wonderland Awards. Second, thank you so much to all those voted. You’re the fucking best. Also, a huge shout out to my fellow nominees. Every one of you makes incredible art and it’s been an honour to be recognized alongside such inspirational people.

I can’t begin to express how much this award means to me. When I was fifteen years old, I was diagnosed with systemic Lupus. The disease affected my brain, and often impaired my ability to be creative. For years, writing seemed like an insurmountable task. But I persisted. Fighting through the fatigue, the pain, and the fog. Because writing was the only thing that kept me grounded. It was a safe space, a reservoir into which I could pour my fears and anxieties.

And that persistence was rewarded in more ways than one. Nightmares in Ecstasy was the culmination of several years of hard work. But, more importantly, it’s tangible proof that I haven’t let this disease control my life, or determine who I am. So, thank you to everyone who purchased the book, read and reviewed the stories, and helped spread the word. I can never thank you enough.

To my fellow writers, if I can leave you with a parting message, it’s this: don’t let anything get in the way between you and the stories you want to tell. The world needs stories more than ever, and you never know if that idea nestled in your brain will save someone’s life. Stories sure as hell saved mine.

Also, a huge thank you to CLASH Books and everyone else who took a chance on these stories. I wouldn’t be here without you.

For those interested, you can buy the book on Amazon or directly from the publisher. 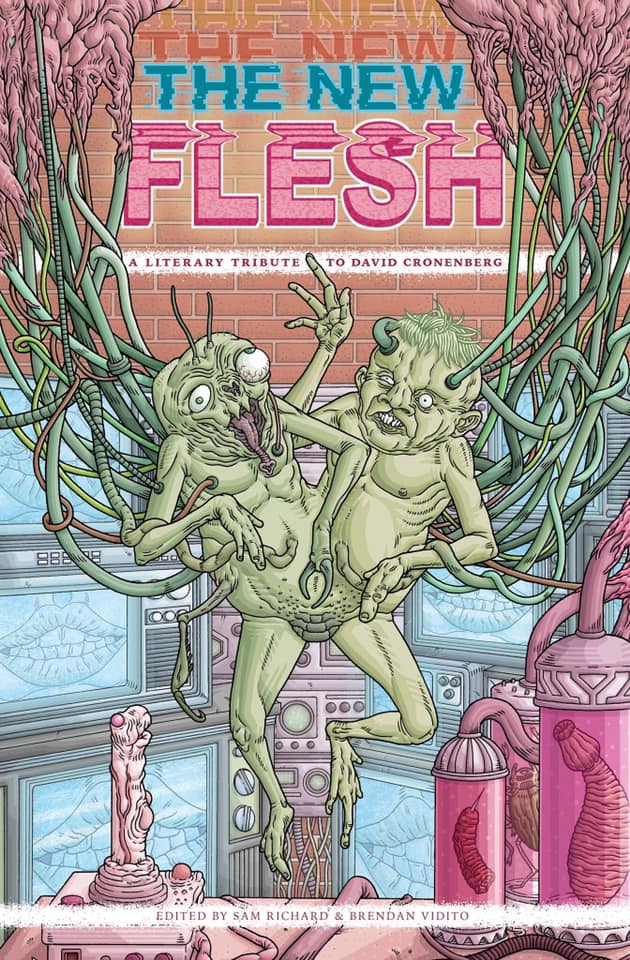 This is not a drill You read the title! Head over to Amazon or the Weirdpunk Books store to pick up a copy today! Here’s the back cover blurb:

Videodrome. Scanners. The Brood. Crash. The Fly. The films of David Cronenberg have haunted and inspired generations. His name has become synonymous with the body horror subgenre and the term “Cronenbergian” has been used to describe the stark, grotesque, and elusive quality of his work. These eighteen stories bring his themes and ideas into the present, throbbing with unnatural life.

A yoga group brings transcendence and bodily transformation. A woman undergoing Gender Confirmation Surgery is subjected to outlandish techniques. A young man discovers the reality-warping potential of a bootleg horror VHS. A mother comes to terms with the monstrous appetites of her newborn child.

Being terrified is just the beginning.

Become one with us and take a deep, penetrating dive into the plasma pool…

This is THE NEW FLESH.

With an Introduction by Kathe Koja

Happy Halloween, everyone! I’m excited to announce that my collection, Nightmares in Ecstasy, has been nominated for a Wonderland Award. Head over to this link to check out the other nominees! There’s quite a lineup this year, and I’m happy to say that I’ve read most of the books included. And guess what? They’re all incredible. It’s going to be difficult voting for a winner. Good luck to all the nominees!

In other news, visit Clash Mag to read “Nightmare Muses” an article I wrote concerning the books, movies (and video game) that inspired the stories in my collection. It’s always a pleasure writing about the shit I love, so give it a read if you need any movie recommendation for Halloween night!

Stay tuned for more news regarding the upcoming anthology, THE NEW FLESH: A LITERARY TRIBUTE TO DAVID CRONENBERG, as well as other upcoming short story releases!

Have a sexy and terrifying night!

I’m pleased to announce that my short story, “Walking in Ash” is included in the newly released Pluto in Furs: Tales of Diseased Desires and Seductive Horrors, edited by Scott Dwyer. This anthology is an absolute powerhouse, featuring stories from some of the best writers in the fields of horror and weird fiction. My tale is about a young couple haunted by an apocalyptic tragedy that hasn’t happened yet. I’m extremely proud of this piece. It’s surreal, anxiety-ridden, and probably one of the best things I’ve written so far. You can pick up a copy here!

Speaking of Scott Dwyer, he was kind enough to interview me a few months back for his website, The Plutonian. We talked about the current state of the horror genre, transgressive fiction, human sexuality, and the works that influenced my collection, Nightmares in Ecstasy. You can read the transcript here!

For the past several months, I’ve been hard at work with Sam Richard on my first editorial project, an anthology called The New Flesh: A Literary Tribute to David Cronenberg. And now, after all this time, we’re finally able to share the official table of contents.

But first, flashback to BizarroCon 2016. Sam Richard and I had met less than an hour ago. We were drunk on free beer and chatting about everything from J.G. Ballard to body horror. The conversation then steered toward themed anthologies. We both remarked how cool it would be if there was a collection of stories inspired by the films of David Cronenberg (much like the David Lynch-themed In Heaven Everything is Fine, edited by Cameron Pierce). We agreed that–if ever given the chance–we would work on the project together. And, of course, years later, a drunken fantasy became reality.

It’s been a privilege working with so many amazing writers. We can’t wait to unleash these stories on the world. This book will be a must buy for fans of the horror genre.

So without further ado, here are the stories:

The cover art shown above was masterfully created by Michael Bukowski. Also, check out this amazing internal art by the iconic and incomparable Jim Agpalza! 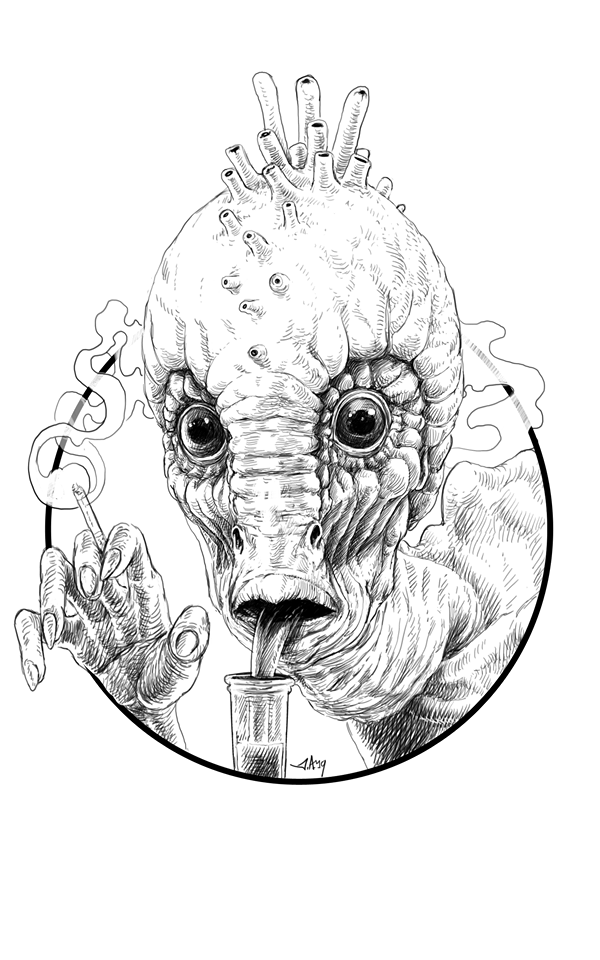 It’s been some time since I posted an update. I’ve been busy at work on the upcoming anthology The New Flesh: A Literary Tribute to David Cronenberg, and the follow-up to my 2018 collection, Nightmares in Ecstasy–a horror novel that I’m incredibly excited to share with everyone.

While you wait for these releases, I have some news to share! I’m very excited and humbled to announce that my short story “Fuck Shock” has been reprinted in Past Indiscretions: The Very Best of Splatterpunk Zine. “Fuck Shock” was originally published in issue #6 of Splatterpunk Zine, and was the first short story I ever sold. I’m indebted to the zine’s editor, Jack Bantry, for helping kick start my career in horror fiction. I’m happy to see this grotesque little story back in print, and alongside so many excellent writers in the genre. You can order a copy here!

I also wanted to take this opportunity to share a glowing review of my collection by the incomparable book reviewer, Biblioculus. Her reviews are incredibly thoughtful and compelling. You should take the time to browse her website. Here’s an an excerpt from the review. You can read the full thing here:

Stay tuned for an update regarding The New Flesh. There’s more exciting news to come!

Hello, everyone! When I was fifteen years old, I was diagnosed with Central Nervous System Lupus. For the first time ever, I decided to write about my experiences with the disease, and how they shaped me as a horror writer. It’s called “Healing Through Horror”. The piece was incredibly difficult to write, as I was forced to revisit some rather unpleasant memories. I struggle with the trauma every day. I’m grateful to Kris Bone and the Town Crier/The Puritan for allowing me the opportunity to share this story with the world. Hopefully it’ll resonate with someone who has undergone similar experiences. My stories aren’t for everyone, but if you’re going to read only one of my works, please read this one! You can read the piece here!

I’m incredibly excited to announce that both my collection, Nightmares in Ecstasy, and my short story “Rebound” have been nominated for a Splatterpunk Award. It’s an honour to be recognized alongside so many talented writers–and more than a little overwhelming, to be honest. I want to wish all my fellow nominees the best of luck!

If you have not done so already, now would be the perfect time to pick up my collection. You can buy it here, in paperback or ebook. And if you have to chance, remember to drop a review. It’s incredibly helpful!

Also, here’s a video of me reading my short story “Rebound” at last year’s Killer Con. This story is a lot lighter compared to the other fare in the collection, and is by far my favourite to read to a group. I hope you enjoy!